Ivan, a Ruthenian mountain farmer, has many talents.
On the one hand, he plays several musical instruments, even though
his greatest passion doubtlessly pertains to his violins.
On the other hand, he is able to build jew‘s harps
virtually out of nothing. But most probably he himself is not aware
of his most outstanding talent: He is witty and
extremely entertaining – a real cinematic discovery!
So the film literally starts close-up to Ivan, who delivers a brilliant
and strangely funny performance in his hidden mountain village
of Obcina.
After the first two successful parts of the Ruthenian Trilogy threads need
to be picked up again to outtell the story.
With no little worries, we find out that 15 year-old Irina has “shacked up” with
her “prince” Gheorghe. Once taken this brave decision, there is more
at stake for Irina than for him. New, and quite impressive, Ruthenian
characters enter the “stage”:
Mihai, who, in spite of his handicap, managed to gain a respected
position among the village kids. But what we see then is almost
a miracle: Ivan discovers a new talent! This time he spots it not within
himself, but in 10 year – old Adi.
At the end, all threads converge, and we learn with certain surprise what
the “Third Violin” is all about. Let this much be said: In spite of
all the bitter tears shed over useless deaths Obcina will go on living,
and Adi will laugh again!

Reinhardt Björn was born in Berlin 1963. Between 1983 and 1985 he worked as production assistant at the Deutschen Fernsehfunk in Berlin. In 1995 he debuted as director with the documentary After Seven Castles, which was broadcast on Romanian TV and on Deutsche Welle TV. Between 2000 and 2002, he worked as head of production at Zeitzeugen TV; since 2002 he has produced documentaries in Romania. His most recent films include Kalami (2009), Valley of Tears (2008) and Mama Buna (2008). 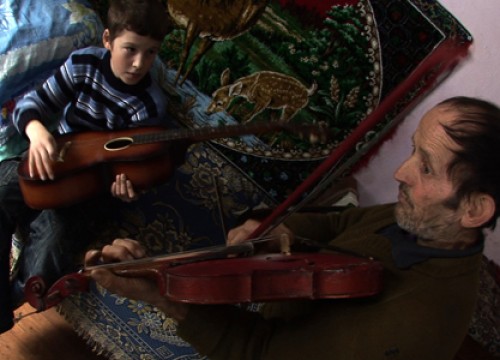