Every day around ten thousand people enter the tunnels of the Posokoni tin mine, the largest in Bolivia. The history of the mine is complex and it has been at the centre of social and economic conflict. Most of the tunnels have no absolutely no lighting or security equipment to prevent collapse or to assist in the recovery of those who are crushed by material falling from the walls. There are individual miners who recover very small quantities of minerals in the dim light of lanterns and with makeshift tools. There are also organised teams equipped with primitive technology. It is a very tough and repetitive life, alleviated by occasional breaks, during which a few words are exchanged, often recounting events happening in the outside world, a bottle of some alcoholic drink is passed from hand to hand and coke is smoked and chewed.

Mauricio Quiroga Russo is a director and sound designer. He was born in La Paz, Bolivia, but now studies at the Univercidad del Cine, Buenos Aires, Argentina. His first short-film “Enterprisse” (2010) was screened at a host of film festivals worldwide. “Juku” is his second film. 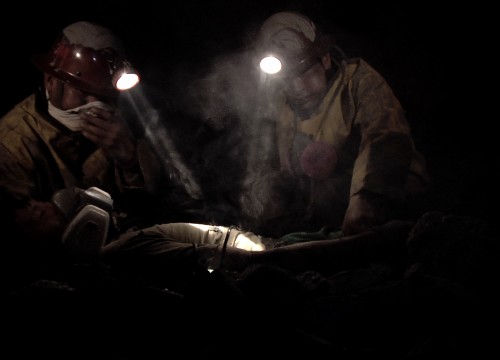