What is the quickest route from Entre Ríos in Argentina to the Chinese metropolis of Shanghai? Easy! Just draw a line through the centre of the Earth because the two cities are antipodal. Multi award-winning documentary-maker Victor Kossakovsky visits four couples in places that are diametrically opposite one another in a film that turns our vision of the world upside-down. A peaceful sunset in Entre Rios contrasts with the bustling, rainy streets of Shanghai. The people who live in a desolate land stand feet-to-feet with a people living near a volcano. These stunning, soul-touching landscapes are in sharp contrast to the noise of a big city. Could these antipodes be mystically connected to their exact opposites?

Documentary director Victor Kossakovsky started to work as an Assistant Director, Editor and Cameraman at the Leningrad Studio of Documentaries in 1978. In 1988, he completed his Director and Film-Making studies in Moscow. Since then he has won a range of awards, including the “Triumph” prize, RF State Award, “Nika” prize, and a whole host of other national and international awards. He founded his own St. Petersburg production studio, Kossakovsky Film Production, which makes films about poetics and reality. 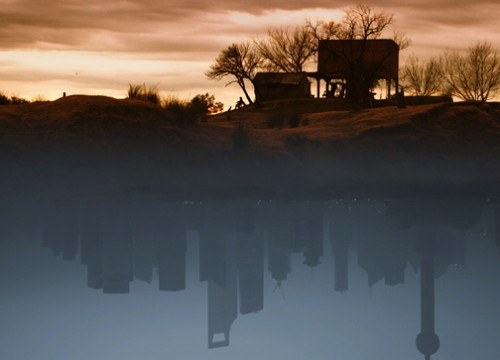