“I grew up in the heart of central Switzerland, opposite Mount Rigi. Since I was a child, the stunning profile of this mountain has never ceased to amaze me. In 1480 Albrecht von Bonstetten, Deacon of the Abbey of Einsiedeln, described Mount Rigi as “the centre of the world”. In the film Mein erster Berg I try first of all to analyse this “centre” as a witness of our times. The Rigi is also the most important mountain for the shepherd Martel Schindler. Just like his ancestors, he grew up, lives and works on the mountain, which is also a well-known tourist destination. In this film I try to analyse the heart of a magnificent landscape and the heart of an individual, to create a snapshot of the heart of Switzerland.” Erich Langjahr

Born in Switzerland in 1944, he has worked as an independent director since 1971. His work, mostly made up of documentaries and often filmed in Switzerland, includes among others “Justice” (1973), “Sieg der Ordnung” (1976) and “Made in Switzerland” (1981). In 1986 his film “Ex voto” was awarded prizes at the festivals of Nyon and Leipzog. “Männer im Ring”, dedicated to the last male canton council in Hundwill, has also been given numerous awards. 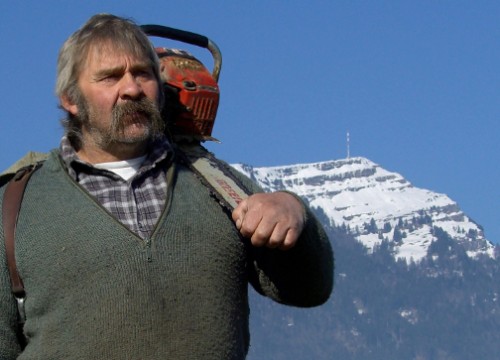