Tom Ballard lives in a camper van together with his elderly father James. His mother, the famous climber Alison Hargreaves, lost her life coming down K2 when Tom was only 6 years old and since then the boy has pursued the dream of becoming a mountaineer and of climbing the six great north faces of the Alps in a single winter. Nobody has yet managed to do so with this timescale and he wishes to become the first. Accompanied by his father, who drives a white van, Tom will face any risk in order to fulfill his dream.

In memory of Tom Ballard and Daniele Nardi

After completing his directing studies in 1999, he started working as an assistant cameraman. Since 2009 he has been teaching Documentary Techniques at the University of Madrid.

Elena Goatelli is a filmmaker and documentary filmmaker, with more than 15 years of international experience. In 2013, together with Angel Esteban, she founded KOTTOMfilms. 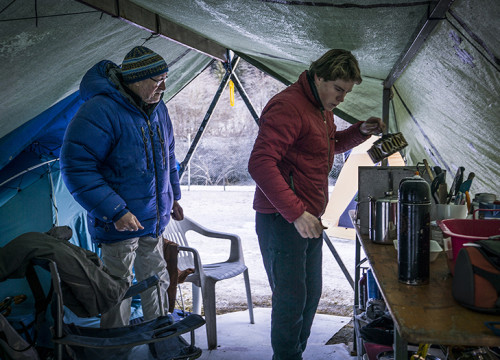