The Trentino expedition to the Patagonia Andes in 1957-58 was the first of a long series that led the mountaineers of our province to climb several important Patagonian peaks. Recently we have found some fragments of the film about this expedition which were considered lost and that even at the time had been seen by very few people.
The witnesses were:
Claudio Ambrosi, Armando Aste, Franco De Battaglia, Betulla Detassis, Jalla Detassis, Stella Detassis, Valentina Eccher, Josef Espen, Franco Giacomoni, Franco Giovannini, Gastone Golini, Cesare Maestri, Mario Manica, Ulisse Marzatico, Elio Orlandi, Franco Pedrotti, Guido Stenico, Fabrizio Torchio and Pietro Voltolini.
The original film and photos of the Trentino expedition to the Patagonia Andes are by LUCIANO ECCHER, the photo album of Marino Stenico is courtesy of her daughter CRISTINA STENICO MAFFEI, all the other documents and items come from the BIBLIOTECA DELLA MONTAGNA-ARCHIVIO STORICO SAT. (The mountain library – SAT Historical archives) 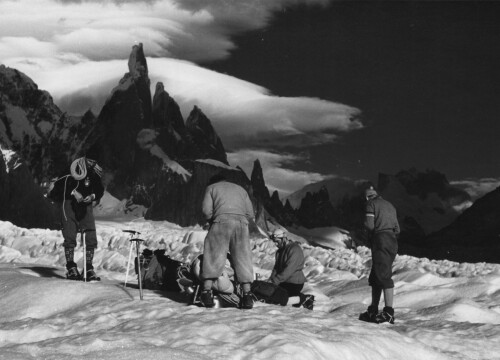