It is no coincidence that the Italian town Cuneo sprang up at the point where two rivers meet. Water was a natural defence against enemies and powered agriculture and industry. Along the riverbank, people fished, gathered firewood, and collected sand and rocks to build houses. The riverbanks also bore pastures and wild grasses. In summer, people would bathe in the river and have a riverside picnic on Sundays. The riverbed was a place of work, play, freedom and adventure. The river gave much to the local inhabitants and they took care of it in return. Then everything changed: people deserted the riverbed and cities felt they no longer needed the river. There are still some, however, who continue to go down to the river and love it, even when it is dry and fishless, because the river still has a voice.

Elena Valsania was born in Turin 1973. She attended a degree course in Communication and Daniele Segre’s Scuola di Video Documentazione Sociale “I cammelli”. She has made independent documentaries for SAT 2000, RAI 3 and Palomar. In 2006, she won first prize for her Spot del Piano Strategico di Cuneo in the Institutional Communication of Public Bodies section at the COMPA in Bologna. She is working on an archive of video-accounts about life along the rivers Gesso and Stura for the Municipality of Cuneo. Her filmography includes San Placido (2006) and Violenza. Ciò che resta (2005). 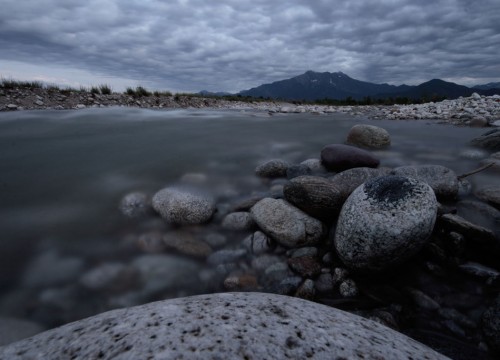