Two young men, Henry Favre and Ludovico Botalla, made a return journey covering a distance of ten thousand kilometres to arrive at North Cape from Aosta. They cut vertically through Europe, crossing northern Italy, Austria, Germany, Denmark, Sweden and Norway until they reached North Cape, at the top of Europe, not with the classic motorbike or comfortable camper van, but rather on board the legendary three-wheeled Piaggio Ape van, accompanied by its unmistakable buzzing sound. The whole journey to North Cape lasted no less than 30 days, travelling at a maximum speed of 60 km/h.

Born in Turin in 1989, she has lived in Aosta for the last few years. After obtaining a high school diploma with an emphasis on classics, she graduated from the Film Faculty of the University of Turin in 2013.

He was born in Aosta in 1989, where he still lives. He has always had a passion for the mountains. 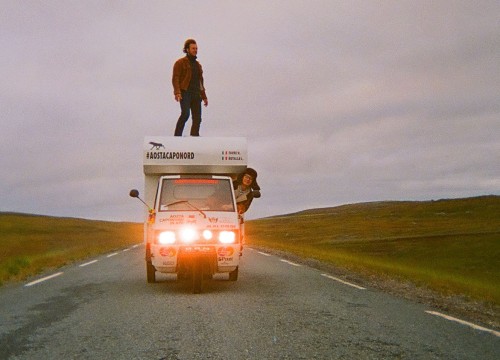