In a world abandoned by men, a mechanical monk pursues a strange little red man. After having crossed woods, dead cities and desolate lands, the two amusing characters arrive at the top of a magical hill. The finding of an old teddy bear will allow them to escape the emptiness that surrounds them. I racconti dell'orso is a low budget project, developing out of a project to make a film with only two people during a journey through Finland and Norway lasting forty days. Samuele Sestieri and Olmo Amato handled all the tasks necessary for filming, from production and direction to the photography and acting.

Born in Rome in 1989, he gained a diploma in direction and screenwriting at the Accademia di Cinema, ACT Multimedia. He has written, directed and edited around ten short films. He founded the blog Schermo bianco and is one of the news editors for the film magazine Point Blank.

Born in Rome in 1986, he is a professional photographer and videomaker. He deals with fine art printing, post-production and education. He also supervises the photographic archives of the Fondo Alberto Moravia. 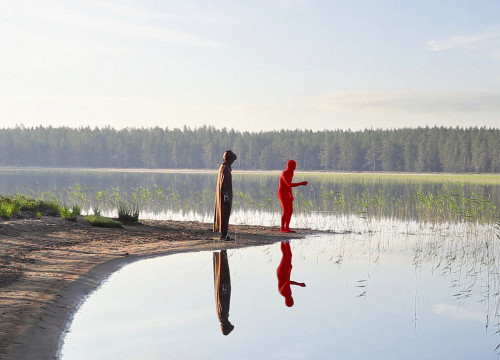