In autumn 2013 the Flying Frenchies team of stuntman met up in the Gorges du Verdon for a whole week, together with the aerial dancers of Compagnie 9.81, the music group of Radio Monkey and the cameramen of Baraka Films. The encounter between these companies of acrobats and artists gave rise to an unrepeatable spectacle, a performance largely based on dangerous improvisation, risk and the challenge to the laws of gravity.

After having studied physics and attended the conservatoire, he began working in the theatre as a set designer and sound technician. His meeting with Julien Nadiras, a climber and cameraman, convinced him to found BarakaFlims, an audiovisual production company. His main works include: The Mont Rebei Project (2015), La derniere trompette (2014) and Petzl roctrip Argentina (2013). 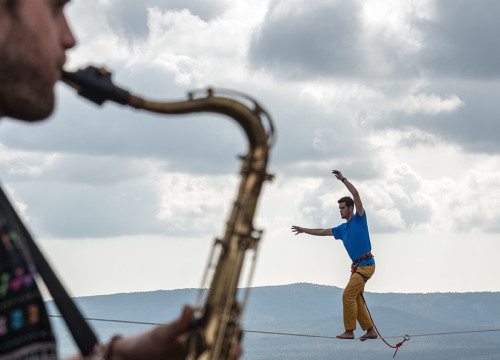