Somewhere between Asia and Europe lies Absurdistan, a village in the desert inhabited by fourteen families. The village’s biggest problem is its lack of water. The village women’s biggest problem, however, is the laziness of their men, who do not want to do anything about the situation. Against the backdrop of these problems runs the story of Aya and Temelko, two young people who have been friends since birth. Their friendship turns to love, but unfortunately the date that Aya’s grandmother has predicted for their ‘first time’, is four years away. To make the matter worse, Aya and Temelko have to take a bath together. A war of the sexes is on the cards…

Veit Helmer was born in 1968; he is a fellow of the European Film Academy. He writes and produces for his own production company. He made his first film at the age of fourteen after beginning his studies at the Munich Film School, where he became known for his eccentric short films. In 1995, he co-wrote a feature film, A Trick of Light, and worked as director’s assistant to Wim Wenders. The film was previewed in Venice in 1997. His first real feature film, Tuvalu, has been shown at sixty-two festivals and has won huge acclaim. 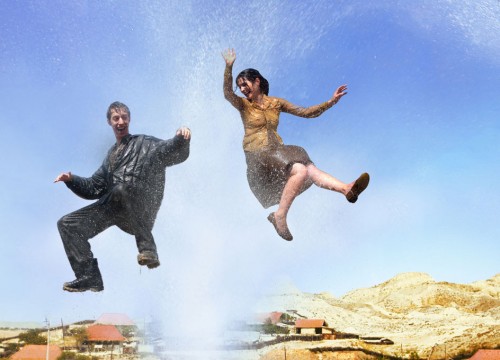