This film shows the extraordinary exploits of John Silvester who, with director Alun Hughes, flew a paraglider across some of the highest mountains in the Karakoram range, Pakistan, one of the world’s most extreme, yet stunning, environments for lovers of this sport. Entrusting themselves to nothing more than a 10 kg nylon wing and John’s piloting skills, the two fly across a remote world of snow, ice and unexplored lands in a continuous fight for survival. A film that rebuts the widespread belief that paragliding is a relaxing sport in which air currents float you gently through the sky.

Welshman Alun Hughes used to be a mountain guide. He made his first film, Stoney Monkey: Portrait of a Rock Climber, in 1988, winning the Trentino Sport prize at the TrentoFilmfestival in 1989. He specialises in programmes and documentaries on outdoor activities and his works have been successful at a number of international film festivals. His most recent productions include Dringo I’r Eitha’ (2008) and From Nowhere to the Middle of Nowhere (2000). 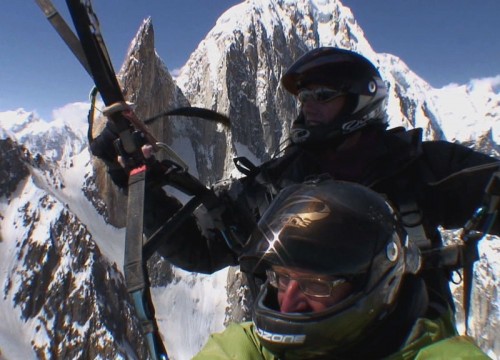