January 1959 saw the arrival in Trento of the first mountain-rescue helicopter: an Agusta Bell 47 Jota “Ranger” with wooden blades piloted by Captain Ernesto Zanlucchi. This film, which was made to celebrate fifty years of the Nucleo Elicotteri del Trentino, tells the story of this flying squad. It commemorates the pioneers and the first vehicles, and explains the squad’s organisation; it also shows the squad’s operations and its duties, which included summer and winter mountain rescue, aerial work, and fire and avalanche patrols, as well as vehicle maintenance and personnel training.

Corrado Zanetti was born in Trento in September 1955; he has been a professional journalist since 1988. Until 2003, he worked as a journalist in the editing department of Trento daily newspapers “Alto Adige” and “Trentino”, where he dealt with news, politics, agriculture and valleys. Since 2003, he has been Editor-in-Chief at the Press Office of the Autonomous Province of Trento. 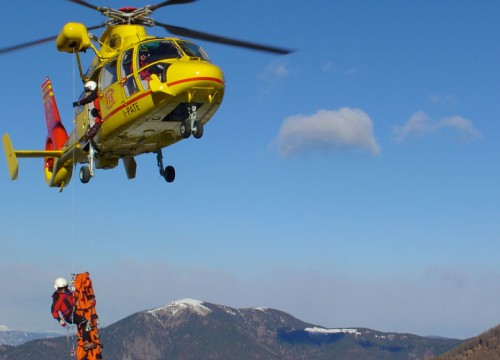