The story narrates the dangerous journey on the peaks of Everest by Sanobabu Sanuwar, a twenty-nine-year-old pilot and kayaking champion and Lakpa Sherpa, the most famous and expert guide to Everest. The spectator accompanies them as they launch themselves from the peak in a tandem hang gliding flight, establishing a new world record for free flight. This incredible mountaineering and hang gliding feat changed the climbing culture forever and made Babu and Lakpa Sherpa into new national heroes in Nepal. The mission which saw them make their way “from the peaks to the ocean” took them along the whole course of the River Ganges up to the ocean, which neither of them had ever seen until that moment.

A director of American origin, he has spent the last ten years of his life travelling all over the world and making documentaries in the various places he has visited. In 2009 he spent a whole year in India to make a number of documentaries for the archives of the Dalai Lama. He has also worked in South Korea as the Director of the film “Lagoon” and as co-producer of the film “Further Beyond”. His works also include the series of documentaries entitled “The Burning Question”. 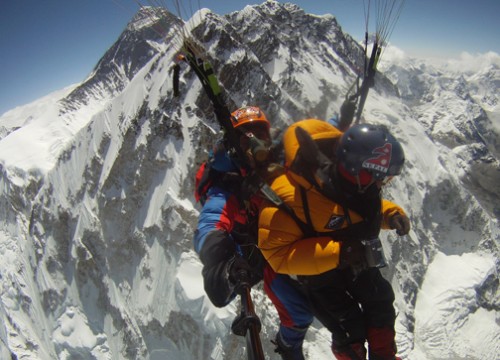