In 2010, during an excursion, Elie Chevieux saw a big wall in Baspa Valley, in the Indian district of Kinnaur, surrounded by Tibet to the East. The following year he decided to return there, accompanied by Giovanni Quirici and Yannick Boissenot, to establish a new route over an unspoilt peak: the Shoshala (4.700 metres). After 2 months in India, 3 weeks at the base camp and just 3 days of sun, the three opened up a 2300 metre route, including several passages with a 7th grade rating and arrived at the summit at an altitude of 15,400 feet. This was the last expedition in which Giovanni Quirici participated. The film is also intended as a tribute to the Ticino climber, who died in August 2011 on the north face of the Eiger at the age of just 33.

Yannick first approached directing at the age of 15. He subsequently worked for a production company for two years, before creating his own independent company. He has been to Japan twice to make skiing films, following a professional skier on the descent from Mount Fuji, while in 2010 he made the first documentary on urban climbing, together with his brother. Passionately interested in the mountains, climbing and film, thanks to his directing work he has managed to combine all his areas of interest. 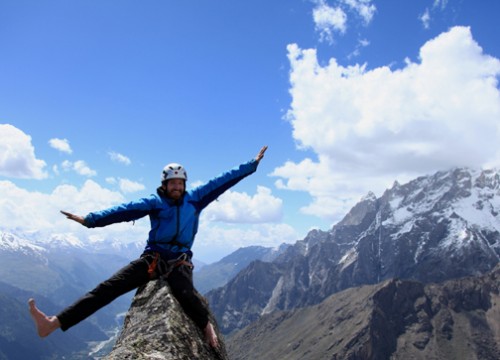