While they are trying to transport a pulpit to a village in the mountains with a motor vehicle, four middle-aged men are stopped by the police at a road block: the road has been closed due to heavy snowfall during a blizzard which is still underway. However the village worthy who has ordered the pupil is in a hurry to arrive for an important religious festival (he does not want to cut a poor figure with his fellow villagers) and convinces the others to take a secondary road. The vehicle first proceeds without difficulty in an increasingly heavy blizzard but is then brought to a halt by the snow. Thus they find themselves trapped in the middle of the icy mountains in a blizzard and despair of salvation. Just when they are about to make a crucial decision, burning the pulpit in order to keep themselves warm and survive, something unexpected happens, perhaps a miracle.

He began working in the cinema industry in 2003, dealing with the direction of certain films and working as an assistant to directors such as Bahaman Ghobadi, on various projects. His first short film, “Always” was made in 2005 and has won various prizes at national film festivals. In 2007 he made his second film, “Shot” lasting 100 seconds. “Symphony of the Night” also won him several national and international awards. In 2011 he made his fourth short film, “The Road is closed”. 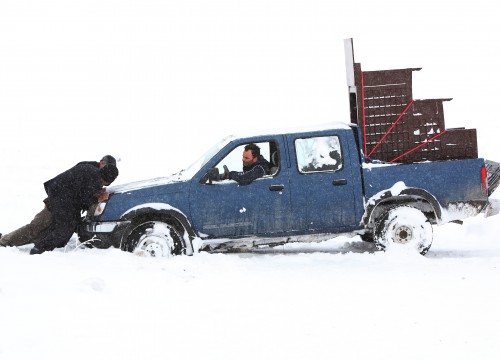