Long considered to be impossible - and precisely for this reason a dream for many – but effectively attempted by only a few intrepid adventurers, the crossing of all the highest crests in the Fitz Roy range has fuelled the imagination of the most daring climbers heading for Patagonia. The breathtaking profile of Cerro Fitz Roy and the six peaks alongside it develops over a length of more than six kilometres, with an elevation gain of almost four thousand metres, crossing rock faces covered with ice and snow. Tommy Caldwell and Alex Honnold succeeded in completing the feat in a single attempt lasting five incredible days in February 2014.

In 1999 he founded Sender Films, which in a few years has grown from a small business producing its own videos into one of the main companies operating in the sector, specialising in the making of climbing films and various television programmes. He has made numerous documentaries, including King Lines (2007), The Sharp End (2008) and First Ascent (2010). 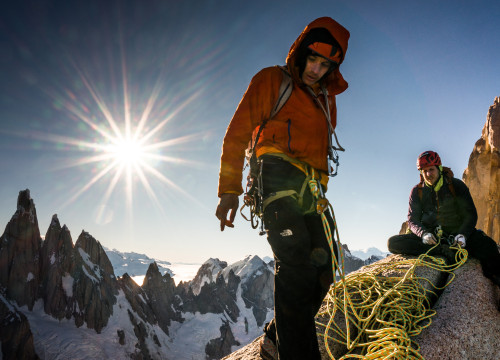