Andermatt is a small town lying at the confluence of three important Swiss passes. Due to this strategic position, the town’s history has been characterised by wars: already the scene of an important battle between Napoleonic and Russian troops in 1799, during the Cold War there were numerous barracks and military structures sited there. For this reason, when the possibility of opening up to global tourism emerges, thanks to the investment of the Egyptian magnate Samih Sawiris, the population reacts with conviction and enthusiasm. Sawiri wishes to transform Andermatt into an exclusive tourist location, with ultra luxurious hotels, chairlifts with heated seats, golf courses and a whole new residential district. Understanding the importance and emblematic nature of the situation, Leonidas Bieri began filming this epoch-making transformation from the very beginning, recording the difficult progress of the works, the radical transformation of the landscape and the bewilderment of the inhabitants.

Born in Zurich in 1980, he studied History and Geography in Berne and subsequently Communication and Journalism Science in Fribourg. In 2012 he began teaching in secondary and vocational schools. In 2007 he made his first documentary, Warten auf die Zukunft – Vier junge Albaner erzählen aus ihrem Alltag im Kosovo. 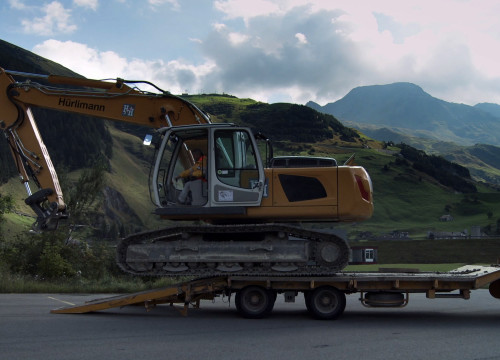