A child lives with his parents in the countryside, but one day his father leaves for the city in search of a job. The boy decides to follow his trail.

WIKIPEDIA
(born March 6, 1971) is a Brazilian film director and screenwriter. Sírius, his first short film, debuted at the 1993 Anima Mundi as the only Brazilian animation that year. It won the Best Film Award at the Festival de Cine para Niños y Jovenes and was also screened at the Mostra Internacional de Cinema São Paulo and at the section Animation for Children of the Hiroshima International Animation Festival. His second short film, Espantalho (lit. "Scarecrow"), released in 1998, won the 3rd Best Brazilian Animation at the Anima Mundi, the Best Art Direction Award at the Brazilian Film Festival of Miami, and was nominated for Best Animated Feature at the 1st Grande Prêmio Cinema Brasil. His first feature film, Garoto Cósmico, debuted at the 2007 Anima Mundi. In 2013, he released The Boy and the World, his second film, at the Ottawa International Animation Festival. 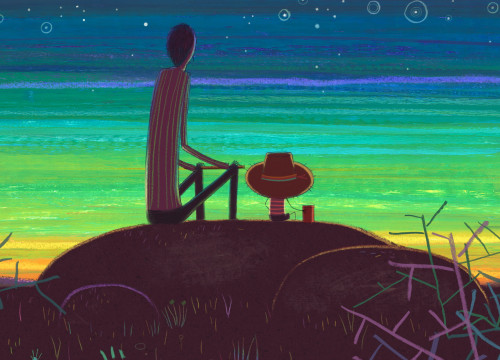