The "Shark’s Fin” route on the Meru is unanimously considered to be one of the ultimate feats for every climber, to the extent that in the last thirty years there have been more failures than successes. In October 2008 Conrad Anker, Jimmy Chin and Renan Ozturk decide to take on the challenge, but what was planned as a seven-day expedition turns out to be a twenty-day odyssey spent in sub-zero temperatures, due to a formidable cyclone leaving more than three metres of fresh snow on their route. Exhausted, they decide to abandon the attempt, but once they return home a series of personal circumstances will convince them to try again, also for a question of personal satisfaction. In 2011 Anker finally succeeds in convincing his companions to face the great Meru challenge once more.

After having been part of the North Face Athlete Team for fourteen years, he decided to dedicate himself to his career as a photographer and documentary maker, following some of the most daring athletes and explorers at close hand. As a director he has worked with North Face, Pirelli, Apple and National Geographic.

During her career she has made numerous documentaries, including Touba (2013), Youssou N’Dour: I Bring What I Love (2009) and A Normal Life (2003). She lives with her husband and two children in New York. 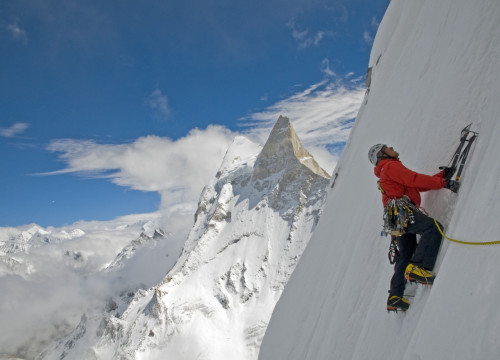