Eleven Tibetans, fervent Buddhists, set off on a walk of more than two thousand kilometres to arrive at the holy city of Lhasa, where the Dalai Lama lives. Their journey will last months and encounter every possible difficulty, not least the decision to make the journey using a tantric ritual involving them prostrating themselves at each step. The pilgrims will find the force to proceed with joy towards their destination in the repetitive movement and their determination. With a delicate balance between documentary and fiction, watching the film inevitably involves and transmits an example of unusually strong spiritual force to the spectators.

Born in Beijing in 1967, he graduated in Chinese literature in 1988, to then specialise in film direction in 1992. Identified as one of the most promising talents in new Chinese filmmaking, with his works he has contributed to recounting life in the city and its transformation in an innovative way. His main works include Spicy Love Soup (1997), Getting home (2007), Driverless (2010) and Full circle (2012). 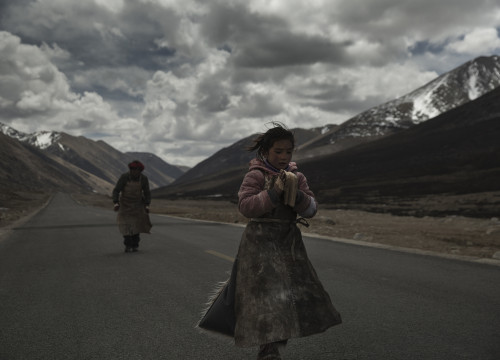