The town of Caltabellotta, in the province of Agrigento, stands on the ruins of the ancient Greek city of Triokala, whose name incorporates the three positive aspects characterising it: the fertility of its land, the abundance of water and a spectacular geographical position at the top of a mountain. Despite the transformations taking place over the course of the centuries, the bonds with ancient times and a magical and ancestral form of knowledge would appear never to have been interrupted and have continued until the present day.

Born in Agrigento in 1984, he graduated in Musicology at the University of Palermo and specialised in Film and Italian Theatre in Florence, in the Faculty of Arts and Philosophy. Between 2010 and 2012 he made his first short films: Cattedrale, Gyruss - a ciascuno il proprio Bach, Desnudez, La salita, Scolpire il tempo. Dio delle zecche: storia di Danilo Dolci in Sicilia (CSC) and his first documentary. Triokala (2015) is his first full-length film. 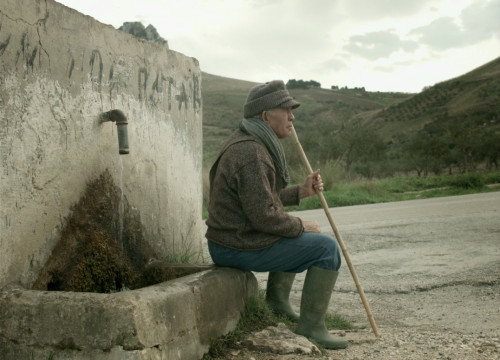