Expert mountain-guide Maciste lives in the Dolomites at the Three Crosses Pass; he dotes on his young nephew Hans, the illegitimate son of his sister, who died of a broken heart for the dishonour of being seduced and abandoned. Maciste’s bitter rival is the sinister Schultz, a smuggler in search of easy money who teams up with two adventurers: Müller and the mysterious Vanna Dardos. Schultz’s plan is to steal the design for a revolutionary aviation project that engineer Riccardo Ewert is finishing in the peace and quiet of his mountain chalet. Vanna, however, is not the only woman who is interested in the engineer, as he has also caught the attention of beautiful English painter Maud Fair, who is holidaying in a luxury hotel and is secretly in love with him. Absorbed in her attempt to seduce the engineer, Vanna fails to notice that a police inspector is on her trail. Ewert is devastated when he finds out that the alluring woman being investigated for espionage is none other than the wife who had an affair and left him years before. In the meantime, Maud, aided by Maciste, manages to fend off Müller’s violent advances. Alerted by the inspector, Ewert pretends to fall into Vanna’s trap so that she can be arrested. Seeing all is lost, Müller and Schultz try to escape along Giant Pass, but they die in a blizzard; Vanna is forced to flee. At long last, Maud can be with the man she loves.

One of the most famous Italian directors of his day, Guido Brignone (born Milan 6 December 1886, died Rome 6 March 1959) came from a family of artists: his father Giuseppe and sister Mercedes were two of Italy’s biggest contemporary silent-film stars. Brignone married Lola Visconti, who was also a famous silent-film actress. In 1915 Brignone made his debut as director with Odette. His film career, however, extended beyond Italy as he also directed a range of films in France and Germany. During the Fascist era, Brignone made films typical of the period that celebrated the hulking action-hero of the day. That hero was unquestionably Maciste, a character created by Gabriele D’Annunzio for Cabiria in 1914. Maciste was also to feature in a host of other films including Maciste Alpino (1916), Maciste Atleta (1918), Maciste all’inferno (1925) and Il gigante delle Dolomiti (1926); the latter two films were directed by Brignone. With the arrival of sound, Brignone made box-office hits such as Teresa Confalonieri (1934), a film that enabled him to become the first Italian director to win the Venice Film Festival in the “Best Italian Film” category. His work as a director continued after the war, with him making films in genres such as feuilleton, mythology, period dramas and comedies. 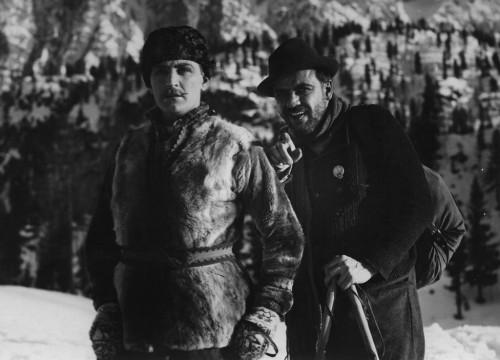