For 76 years a married couple have lived side by side in an old house constructed two hundred years earlier. By now the elderly Byongman Jo is 98 years old, but he still has enough energy to carry home wood for the fire. Perhaps the secret of his longevity lies in the fact that he has never stopped having fun with his wife: playing with the snow, with leaves and with water. His wife Gyeyeul Kang is 89 and continues to cook three meals a day for her husband. Both wear traditional Korean dress, go to the market every five days, organise picnics with the neighbours and enjoy dancing. However, day after day Byongman sees his energy decline and he finds it more and more difficult to get out of bed. Gyeyeul often sits staring silently at the stream flowing past and prepares to say goodbye.

He has produced and directed numerous documentaries for various Korean television channels since 1997. My Love, Don't Cross That River is the first film he has directed. 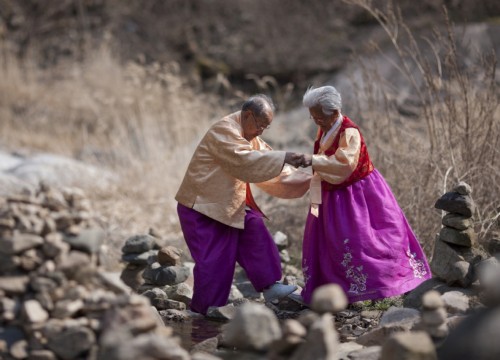